Conservatives are institutions whose memory has been lost, neverless in the Rome of the 16th and 19th centuries they constituted one of the most important welfare and charitable offers, like hospitals, confraternities and hospices. They arose in order to “preserve” and safeguard the honesty of women, give them primary literacy, a Christian education and teach them a profession.

In 1668, in this context, the Conservatory of the “Most Holy Immaculate Conception of Mary” was established, more commonly known as the “Conservatory of the Viperesche”. The foundress was Livia Vipereschi, a Roman noblewoman, who was consecrated and dedicated her entire life to works of charity.

The Conservatory, built on Via di San Vito where it still persists, was created with the economic contribution of illustrious figures from the Roman context, such as the Princess Lucrezia Rospigliosi. The small church annexed to the institute was instead built with funding from the Princess Maria Camilla Orsini Borghese.

As soon as it was founded, the Conservatory was endowed with the first Constitutions and Rules, which described an external government, made up of the Vicegerent and four Deputies, and an internal government composed of the Mother Superior and some teachers.

Originally, some unmarried, orphaned and abandoned girls found hospitality in this structure and they came mostly from Roman families. With the death of the foundress, on December 6, 1673, the girls became heirs of the property of the foundress, with an annual income of 300 scudi, and assumed the name of “Viperesche”.

Starting from the 18th Century, the Educandas and the Oblates are also mentioned as guests of the Conservatory. The first were girls from wealthy families housed under a monthly payment of a fee. The Oblates, on the other hand, were about 10 girls, single or widowed, who decided to stay for the rest of their lives in the Conservatory, dressing the Carmelite dress and taking care of the choir. 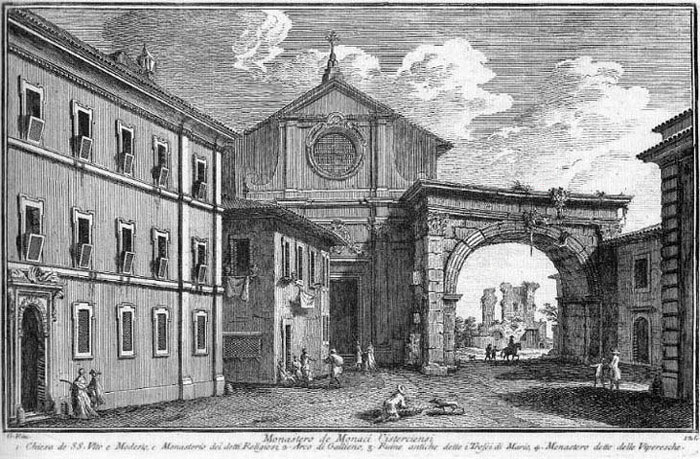 All the girls housed devoted themselves to prayer, to spiritual exercises, to Christian education, to their studies and to domestic and manual work, in particular to the production of gloves.
The increase in girls, the monastic needs and the development of craft activities, led to the need to expand the structure (1760-1762).
Over the years the Conservatory continued to operate on the model of its origins, until in 1869 it became “Convitto Vipereschi della Santissima Concezione“. Under the direction of the Pie Venerine Sisters, it was set up as a private kindergarten, an elementary school, a hostel for students, and a center for female university students, who were granted food, accommodation, religious and cultural assistance.
The Statute of 1876 reiterated the purpose of the Conservatory to give refuge, free or paid, to young girls but also to widows.
With the restoration of 1930, the building was put into statically good condition, the spaces were reorganized, and it was decided to use the majority of the rooms on the ground floor as shops and warehouses.
The Conservatory has been recognized as an Institute of Public Assistance and Charity (IPAB) with Decree n. 6972 of 17 July 1890.
With the resolution of the Regional Council of 15 April 1993, n. 2644 the Conservatory has been recognized as a Foundation, a legal personality under private law, and therefore deleted from the category of the IPAB. The last Statute dates from the same year, and indicates, among the governing bodies, the President, the Board of Directors and the Board of Auditors. The Conservatory has as its purpose the hospitality of female university students. It performs a University College service. From 1988 to 2017 it was directed by the Sisters of the Congregation of the Disciples of the Redeemer in the Christian Community in the World.           To date, it is managed by lay people and includes within it two educational university realities: the “S. Cecilia” Female Theological College from 1988 and from 2017 the Studium Evangelii Gaudium, born from the missionary reform and ecclesiastical academic studies reform promoted by Pope Francis (see Evangelii Gaudium and Veritatis Gaudium)

Taken and traslated from: Iori A., Il Conservatorio delle Viperesche a Roma, Roma 2018